In early 2015, a member of the Commemorative Air Force, Dave Sale noted that there was no real Vietnam aircraft in the AZ Base located at Falcon Field. He had received many requests to view such aircraft, and contacted AAHF.

A new chapter was created, and in late October 2015 the AZ chapter received an AH1F Cobra, #15589. Since then the chapter has grown to over 170 members. The hangar space is provided as a donation by Heliponents, an area company. Boeing has been a very big sponsor donating much needed furniture, aircraft support equipment and money. Inter-Coastal electronics is another sponsor who has provided financial support and we are working with them for a hangar to support the restoration of a Huey UH1C gunship. We also continue to gain much support from the Commemorative AF to show and advertise our chapter.

January of 2020 the Arizona Chapter has merged with the SoCal Detachment and have become the Southwest Chapter of the Army Aviation Heritage Foundation.

This Story Tells Why We Do, What We Do

“…I drove out to California from Arizona for the Redlands Airfest to support 589. It was three hard days in the sun that I will never forget.

I arrived on Thursday afternoon so I could be there on Friday to meet with the event coordinator and ground boss setting up preparations at the last minute. I don’t think my phone has ever rang off the hook like that before but we were able to bring The Black Pearl in to land at the West run-up area of the airport and eventually tow her next to the Marines V-22 and perform the 12-1/2 hour inspection.

Saturday is where the interesting story happened though, and it wasn’t because we sold rides that I would act as load master on Sunday. No. Something much more significant happened, and this single event made the entire weekend worth all the time invested. 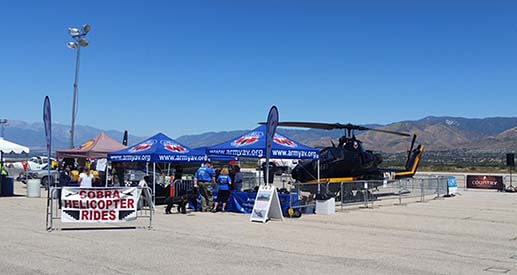 The show was well underway and I had already been talking with people for several hours. I was in the middle of a conversation with someone who had flown on UH-60s when someone ran up to me, shook my hand, and gave me a hug exclaiming “That’s my bird!” I was shocked and didn’t notice that he walked off and continued my conversation with the spectator.

What felt like several hours later the same guy came to me again and asked to sit in the pilot’s seat. He was looking at the helicopter with reverence in his eyes and told me he flew 4000 combat hours between five tours in Vietnam. How could I say no? He stepped onto the ammo bay door and with practiced moves attempted to climb into the aircraft, I just had to help him along the way. Once he was in the seat is when everything changed.

His eyes quickly started roaming around the cockpit and his voice started breaking. His eyes started to get puffy. I could tell he was holding back tears. I have never personally experienced such an emotional response to a machine made of metal and wire and rubber and struggled to hold back tears myself.

I explained to him that ship 589 actually flew combat hours in Vietnam and his hand flew up to cover his mouth. At this point he seemed lost to the world as I noticed his hands “flipping” the switches below the collective and “turning” the dials on the instrument panel and radio stack. I realized he was running through the startup procedure for the helicopter that he remembered, completely oblivious to the fact I was there. He told me afterwards, 50 years suddenly melted away.

I helped him out of the pilot’s seat. He knew all the moves, just needed help. This is why I do, what I do. Why we do, what we do. There is no tangible benefit. Only the benefit that I know and we know what we’re doing matters.”